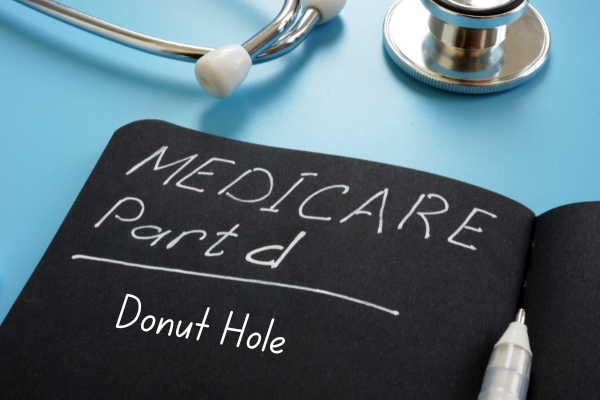 There are four stages of Part D prescription drug coverage:

Before the Affordable Care Act (“ACA”), beneficiaries’ drug expenses (once the deductible was met) were covered up to a certain dollar amount. On standard plan designs, the beneficiary paid 25% of the cost during this phase; then, there was no coverage at all (donut hole) up to another amount. At that point, catastrophic coverage kicked in, and the insurance company paid the bulk of prescription costs (in most cases, the beneficiary would only pay 5 percent of the cost, or a nominal copay).

Although the donut hole has technically closed as a result of the ACA, your out-of-pocket costs can still change once they reach the lower threshold where the donut hole begins. This is because the way costs are counted towards reaching the catastrophic coverage threshold is still different while in the donut hole. Let’s look at this a little deeper.

Medicare’s Part D prescription drug coverage gap or ‘donut hole’ was gradually closed over the course of several years. The donut hole for brand-name drugs closed in 2019 and was eliminated for generic drugs as of 2020.

Under Part D rules, plan members are responsible for 25% of their drug costs during the initial coverage stage. Before the ACA closed the donut hole, members paid 100% during the coverage gap. Now, plan members pay 25% across both stages of coverage.

In other words, the cost gap between initial coverage and the donut hole has now disappeared, effectively closing the donut hole.

But even now that the donut hole is “closed,” it continues to be relevant. Depending on how your plan is designed, you may have different drug costs while in the donut hole. And the donut hole still affects the way costs are tallied up to determine whether you hit the catastrophic coverage level.

And regardless of your plan design or prescription needs, there continues to be a difference in terms of how your drug costs are counted towards reaching the catastrophic coverage limit.

If and when you reach the catastrophic coverage level, you’ll pay either 5% of the cost of each drug or a small copay, whichever is greater, for the remainder of the year.

Your Part D plan will keep track of all of this for you, but this is why there’s still an initial coverage limit, even though the donut hole is closed. It’s really only “closed” in terms of the amount you’re paying at the pharmacy when you pick up medications—and even that is likely to change once you cross over the initial coverage limit amount since it will depend on how your plan structures its coverage.

As a licensed Medicare agent, I can help you find a plan that best meets your prescription drug needs. Call me at (912) 660-5236 to schedule a no-cost, no-obligation appointment to discuss your options today.